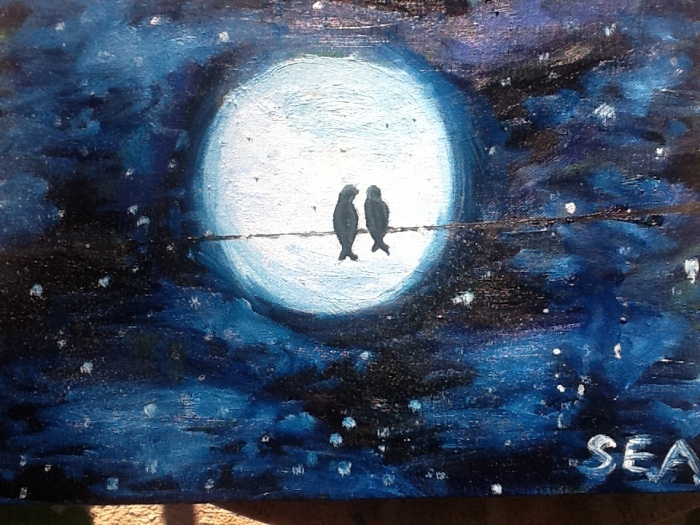 Now I paint birds and roost in the winter…

Pages of calendars
Have favorably flipped
We have finally slipped
From this winter’s grip
The barren bald trees
Hold Spring’s sure surprise
I want to see color
With these yearning eyes
Tulips in tantrums
From slow aching thaw
Fail not to intoxicate
With each breath I draw
Come Spring!
And remove
Winter’s heavy hand
And grace this place
For winter is bland
Dot the trees
Bright green
And the roses
Lipstick pink
Come Spring!
Slow as Moses
It is Spring
I dare think!

I threw away the flowers today I had received as a token of broken vows from someone I once knew. To be correct, someone I once believed I knew. I didn’t know this person anymore than I now know myself. The flowers had been in an orange and green vase for several weeks. I would watch petals turn brown and crisp and fall onto the table. I would watch the flowers wilt. I would worry when they were gone, he would be gone, also.  I held onto dying rotting flowers in the hopes that he would hold on to me as we began to decay.  As the years shed and the core of our existence wobbled through the universe, unsure if it had the capability to survive the knowledge exposed cruelly and carelessly.  He bloomed as a deceiver. He was pathological in thought and deed. He was far from good in his intentions. The soil in which he grew was poisonous.
It was time to make the decision in the brave daylight, with a strong sun. I took the flowers and dumped them over the railing of an old wooden staircase. I watched them be airborne, their stillness, succumbing willingly to gravity pulling them to their final resting place, near a fence, hidden between an old white and blue aluminum house. They would decompose there……as we would.
The weeks pass and he returns. We walk on top of brick side walks planted centuries earlier, before the birth, death, and pain of ever knowing him, had transpired in the stillness of the stars. I see snow croci, purple, pushed up with faces being kissed by the bees. He is standing next to me. I am thinking I cannot believe after this man murdered me this winter, I am alive, next to him, near Spring, casting our eyes in unison upon flowers, and how love shares the same fate as flowers. They are planted and sprouted. They are cared for by the universe  and good intentions. They thrust through the Earth, open their core and pray for kindness. They are mistreated, at times, and they all wither in the sun, die in the frost, endure the betrayal of the same ground in which they bloom.
Spring is a slow beginner this year, and so am I. I have been living in the shadows of a sun too truthful to face, but the flowers are more brave. They face the sun, they burst, bloom and thrive because of the sun. I bloom brown. Despite the return of the warmth to the ground, I do not thrive. “Failure to thrive.”- I remember studying this phenomena as a psychology student, many years ago. Children raised in orphanages, who did not have the appropriate physical affection, grew at a slower pace, and had emotional retardations.
I poked my head up through the earth, bloomed brown, and did not thrive. I am like the decayed flowers I threw over the banister of the stairs, many months ago. On occasion, I would search through the weeds to find the flowers I had abandoned to the fate of dying alone, in the cold, below stairs, and onto an unsympathetic pavement. They lay there rotting, curling up, some petals still attached as if to show their undying loyalty to the  flower, even unto death, while other petals  disengaged and blew away, in the late winter winds, in hopes of being reborn to a new flower….as we did.

The inertia of winter tutors me to be still and grow inward. It reminds me with the blank sheets of each page on the snow bound lawns, the bitterness will yield the sweetness and fragrance of a movement, yet undecided, but deeply known, by the fates of the spinning wheel of destiny. This does not keep me from you, no love, but in the stillness of the death of winter, the secret grows deeper.

© Seanna Pearl, 2013-2014. Unauthorized use and/or duplication of this material without express and written permission from this blog’s author and/or owner is strictly prohibited. Excerpts and links may be used, provided that full and clear credit is given to Seanna Pearl with appropriate and specific direction to the original content.